If you don't know

What is the distinction between cryptocurrency coins and tokens?

You may have come across articles where the terms 'coins' and 'tokens' are used interchangeably in your quest to understand the cryptosphere. It is common to believe that coins and tokens are interchangeable. However, these terms are not interchangeable and have significant differences.

• What exactly is a cryptocurrency coin?

• What is the definition of a cryptocurrency token?

• Distinctions between coins and tokens

What exactly is a cryptocurrency coin?

Bitcoin, the world's largest cryptocurrency, is the best example of a cryptocurrency coin. It exists as a unit of value on its own independent ledger, the Bitcoin blockchain. Other popular coins, such as Ether and Cardano, exist on their own blockchain platforms.

What exactly is a cryptocurrency token?

A crypto token is a digital asset built on a blockchain platform that already exists. It is not a native feature of any blockchain network.

On top of existing blockchains, crypto-related organizations or projects create crypto tokens. The Ethereum blockchain network is where the majority of crypto tokens are issued or minted. They are known as ERC-20 tokens.

Tokens, unlike coins, are very simple to make. A token can be created by writing a bunch of computer codes or using automated tools. You can even name it after yourself if you want. 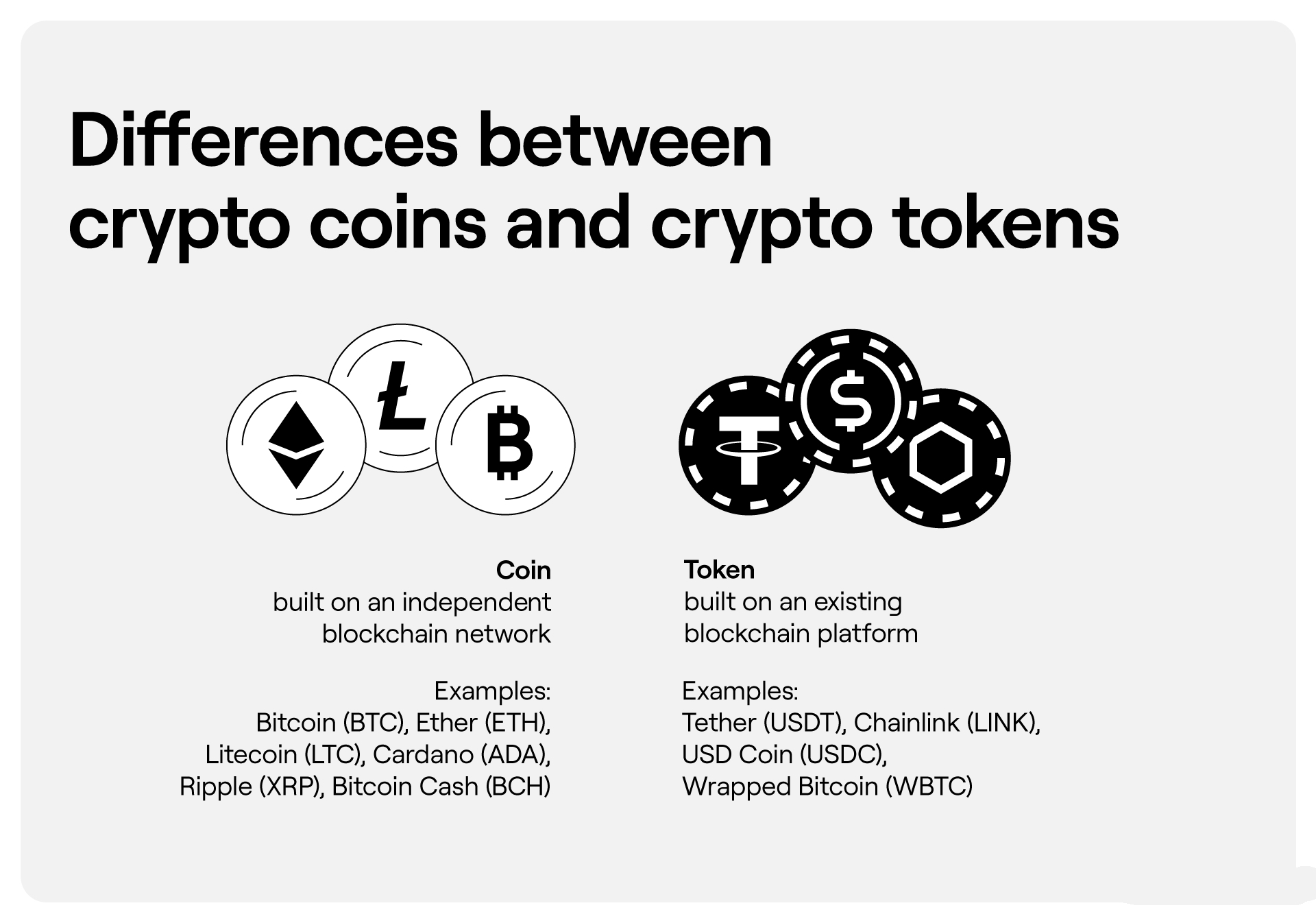 We've examined the fundamental distinction between crypto coins and tokens. Let us examine their distinctions in greater depth.

• Each cryptocurrency coin has its own blockchain network. Tokens, on the other hand, are built on existing blockchains.

• A crypto coin can be used for payments and as a store of value, but tokens, such as security tokens, asset-backed tokens, non-fungible tokens (NFTs), tokenized money (Stablecoins), and so on, have multiple use cases.

• Creating a token is less expensive than creating a coin.

• Tokens can be easily created on an existing blockchain using automated tools and templates, whereas coins require a significant amount of work because they require the creation of a completely new blockchain network.

Tokens are interesting because they can be converted into coins if the project creates its own blockchain. Tokens become coins when they are transferred to the new blockchain network. Binance Coin (BNB) and Tron (TRX) are two examples. They were previously tokens on the Ethereum blockchain, but they now have their own blockchains, namely Binance Smart Chain and Tron.

The simplest way to distinguish between coins and tokens is to see if they have their own blockchain network or not. I hope this info helps you to use the terms "coins" and "tokens" correctly the next time.