If you don't know

WTF happened to the Gini coefficient?

The increasing replacement of currencies goes hand in hand with the fourth industrial revolution, the Great Reset and sustainable development, all of which are synonyms for the new economic order known as technocracy. Price-based economies require existing currencies. Technocracy, a resource-based economic system, relies on energy as its currency, which is carbon-based.

Ironically, the push towards carbon rationing and CBDCs is based on the same insight of sound money advocates: fiat is worthless.

Let me tell you a parable about value. It's about how the "thing" that everyone assumes has value can change over time, and when it changes, people have completely lost touch with the original measure of value.

In the early 00s, easyDNS was preparing to move our servers from our physical office to a real data colocation centre in downtown Toronto.

When we got our first cabinet, we were billed for how much rack space we were using and our bandwidth consumption. At the time, servers were trying to pack themselves into smaller enclosures and compressing payloads to reduce bandwidth. There were 2U enclosures, the latest developments were 1U enclosures, and if you were a dinosaur from the late 90s, you might still have some old 4U servers that cost a fortune in rack space.

What was missing from this equation?

Rewind 20 years and the situation has completely reversed. The biggest cost of providing new rack space these days is usually electricity. Then comes bandwidth and transport. Now rack space is effectively a gateway. In many cases, what people now call "servers" are just virtualised images that don't even take up physical space.

What's changed? The world has changed.

Who cares? Mostly no one.

What I mean by that's that no one thought that switching to charging for electricity usage instead of rack space was a big deal. The overall economics of space have changed, and so has the pricing model. In other words, the underlying commodity changed from thing A (physical space) to thing B (electricity). Apart from adjusting to it, no one really cared.

The same thing happened with "money" - and it'll happen again.

Money used to be backed by gold (Thing A) and then by a national currency that could be exchanged for gold (Thing B). In practise, most people didn't care and continued to use what they'd in their wallets as currency. Thing B even became the global reserve currency.

Then, in 1971, the situation changed again, and the reserve currency could no longer be exchanged for gold (Thing A), while Thing B henceforth ... was nothing any more. It was only supposed to be temporary.

People continued to use the reserve currency as a medium of exchange and found that the fact that the value of the currency was backed by nothing actually made life better for a while. At least for those who were around the people who were able to coin more of this new "nothing money" out of thin air (they became known as Cantillionaires).

Since all the other currencies were backed by the ruling reserve currency, this meant that they were now all backed by Thing B as well. And Thing B was nothing.

There were those who sounded the alarm that the new Thing B (nothingness) was unfit to back a currency, let alone a global reserve currency. Over time, they warned, it would lead to ever greater wealth inequality, serially inflate asset bubbles, followed by ever worse financial crises, and probably end in a hyperinflationary outbreak.

They were dismissed as cranks and conspiracy theorists. In more recent times, as right-wing extremists or stooges of the Kremlin.

But as ignorant and backward-looking as these people were and still are, today even mainstream commentators and anointed experts realise that we've more or less no chance of having a global reserve currency backed by nothing.

The era of fiat currencies is essentially over.

Goldbugs knew it wouldn't last and invested in gold for centuries. They still do today. Now there's also Bitcoin, which uses the same mechanism: in this case, energy is used to back up the currency.

But the globalists and central bankers are in a dilemma.

They've realised that the fiat era, in which money was backed by nothing, is about to end.

But even the central bankers know that they cannot print energy out of thin air. That would make cantillionism obsolete overnight, and we cannot let that happen.

What we need is a basis to back up this currency that has some kind of value, a perceived scarcity or a ceiling, to restore faith and legitimacy in 'money'. It also needs to be something that can be controlled and distributed from the central bank/state mechanism - it needs to be completely removed from the influence of market forces.

And finally, it must have an ideological pillar that can be used to win public opinion for its acceptance.

The new thing B is carbon

In the final throes of the collapsing monetary system, there will be another of these transitions, where the medium of value will shift from Thing A to Thing B.

There will at least be an attempt to implement one. Whether they make it out the door before the monetary endgame remains to be seen. The destruction of the current system has been so accelerated by the pervasive mishandling of the Covid pandemic by policy makers that the current system may be completely derailed before a new one can be put in place.

But the plan from above is that we will move from pricing goods and services based on their production and distribution costs (thing A) to pricing privilege and consumption based on their perceived carbon emissions (thing B).

We've all read the World Economic Forum's latest thought piece, typically cloaked in benign-sounding euphemisms, calling for individual carbon rations and justifying them on the grounds that the world's population is sitting still and complying with global lockdowns. They suggest that people are willing to accept that their individual carbon footprints will be measured by unelected bureaucrats and opaque AI-driven algos.

"Inclusivity of citizens is becoming the most important element of success or failure in the journey towards sustainability. Community-led initiatives can make a significant contribution towards sustainability, increase resilience and social cohesion. There have been numerous examples of personal carbon allowance programs in discussions for the last two decades, however they had limited success due to a lack of social acceptance, political resistance, and a lack of awareness and fair mechanism for tracking “My Carbon” emissions.""

A study conducted by the aforementioned Bitcoin Mining Council may prove him correct. It claims that nearly 60% of the energy used in bitcoin mining is derived from renewable sources. Saylor even believes that mining digital currency using the proof-of-work method could be beneficial to the environment. For example, mining at "stranded" energy source sites, such as methane gas. 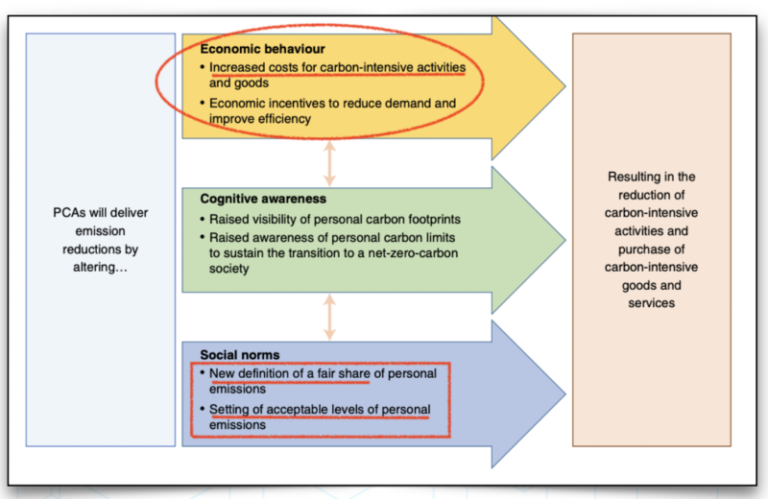 Putting aside (for a moment) the totalitarian implications, this does make some sense. In its own way, it proves what the advocates of hard money have been saying for decades, if not centuries: paper money is worthless.

Behind all the climate alarmism driving the transition to carbon rationing is the implicit admission, whether conscious or unconscious, that money is only viable if it denotes an economic trade-off.

You cannot print value ex nihilo. In this way, over the last 50 years (since the beginning of the fiat era), we have arrived at a world where the price of capital - and therefore of time, if you read Edward Chancellor's latest book (and you should) - is nominally zero, which clashes with the reality of finitude (or with the laws of physics - as someone like Doomberg would say).

The world's central bankers made a huge mistake in dividing by zero, and the result is what we are seeing right now in many dimensions. Bitcoin and the coming CBDCs are both reacting to the same thing, but the difference is who would be served by introducing one mechanism versus the other.

It is important to understand that, similar to the Cantillion effect, when the fundamentals of a monetary system move from Thing A to Thing B, the results are not neutral. An example of this is the Gini coefficient, which is a measure of wealth inequality.

In the graph below by @WTF_1971, we see how it suddenly reversed after a period of secular decline under the Bretton Woods system, exploding at the very inflexion point where the global monetary system abandoned its last link to hard money (Thing A) and the fiat era began (Thing B). 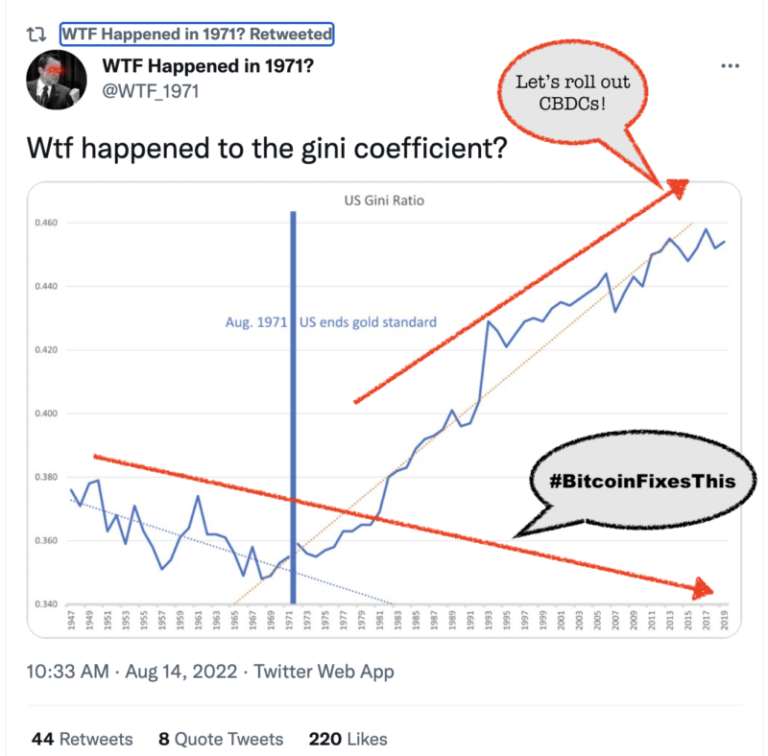 All indications are that the coming CBDCs will be carbon-based social credits promoted and implemented by the same vested interests that acquired and consolidated unimaginable wealth during the previous 50 years of the fiat era - the Cantillionaires.

This path is ultimately doomed to failure because, as I keep stressing, it aims to transfer an industrial age worldview (top-down, centrally planned and linear) to a new architecture: a decentralised, self-organising, adaptive and non-linear architecture.

Since it is one iteration behind at the level of mental abstraction, it is like breeding faster horses in the age of cars. No matter how good you are at it, you are still playing the game on an outdated playing field and will ultimately not be able to compete on the new playing field. (If you are wondering why I often refer to the level of mental abstraction as being such a game changer that ensures the ultimate domination of networks over nations, I refer you to a relatively obscure book by W. R. Clement entitled Quantum Jump: A Survival Guide For the New Renaissance).

The only advice I can give you to navigate the coming transition is to be as financially independent and resilient as possible. Do not allow yourself to become dependent on government benefits, and if you are now, find a way to end that dependence immediately. That these schemes will be closely linked to CBDCs and carbon footprint rationing is a foregone conclusion.

At the very least, you need to be prepared for a transition period where the price of the lifestyle you take for granted today will be set in the form of carbon credits in the future. If you are dependent on state benefits, get used to eating plant-based protein pies. If you are not, get ready to pay more for your Wagyu burgers. A lot more.

Keep as much of your wealth outside the government-run banking system as possible. Bitcoin (outside of exchanges, I also like Monero), gold, silver and own cash flow producing businesses and multiple revenue streams. If you have a job, start a business on the side. If you own a business, start another one.

Start networking with people and tribes who are getting out of the current system, because the one we are in now is either going to go completely off the rails or try to go full CCP in the near future.